Committee on Agriculture, Food and the Marine. 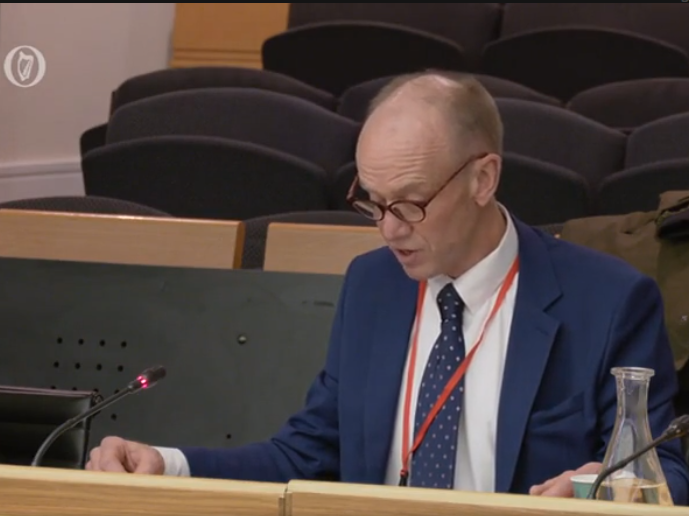 Alan Moore appears in front of a Dail Committee putting the case forward for Hedgerows.


Hedgerows Ireland were invited to a Hearing of the Joint Committee on Agriculture Food and the Marine on 9 February entitled 'Hedgerows, Carbon and Biodiversity'.

A delegation of four attended: Hedgerows Ireland Committee members Alan Moore and Michael Hickey were accompanied by carbon expert Lilian O'Sullivan from Teagasc and the Co. Monaghan Heritage Officer Shirley Clerkin. Cork dairy farmer and founder of The Bride Project Donal Sheehan gave evidence via a video link.  Alan read an Opening Statement and this was followed by questions from Deputies and Senators. The delegation was well received by the Oireachtas Committee who asked relevant questions and appeared to be supportive of Hedgerows Ireland's aims and recommendations. However no decisive action was promised and it is clear that more lobbying and negotiating will be required in the days and weeks ahead.

Presentation to Joint Committee on Agriculture Food and the Marine

Chairman, Deputies and Senators, thank you for inviting us to the Joint Committee.

Why does this matter? To answer, I want to focus briefly on two particular benefits, carbon sequestration and biodiversity

So if we are removing thousands of kilometres of hedgerows annually, the question  arises, are there no protective checks and balances against inappropriate or excessive removal?

Media Coverage of our recent appearance in front of the Committee on Agriculture, Food and the Marine.

Hedgerows give the Irish landscape its distinctive character and field pattern. They provide an important wildlife habitat especially for woodland flora and fauna.